The Mormons, or The Church of Jesus Christ of Latter-Day Saints, claim that their founder, Joseph Smith, translated The Book of Mormon through divine inspiration using special spiritual spectacles which he claimed were the Urim and Thummim of so-called Old Testament writ. While Mr. Smith was never able to produce either the original untranslated document or the special spiritual spectacles, his claim has been accepted by millions of ardent followers of his religion.

Years ago I lived and worked in Salt Lake City, where I was daily confronted with evangelistic Mormons. These proselytizers had been mightily indoctrinated and trained, so that they were actually able to not listen to or attempt to assimilate contrary opinions or evidence. So frustrated with them was I that I made a decision to never again argue with a Mormon about the validity or credibility of their religion. I have remained true to that decision for over 30 years now.

However, the sole purpose of my Bless Yahowah web site is to provide sincere truth seekers with verifiable evidence which they can then use to make informed, rational decisions concerning the fate of their souls. In that spirit, I present to you the following scans of a letter I received back then from the Smithsonian Institute's National Museum of Natural History regarding my inquiry about the historical accuracy of claims made in The Book of Mormon. May you find it helpful.

Letter From the National Museum of Natural History 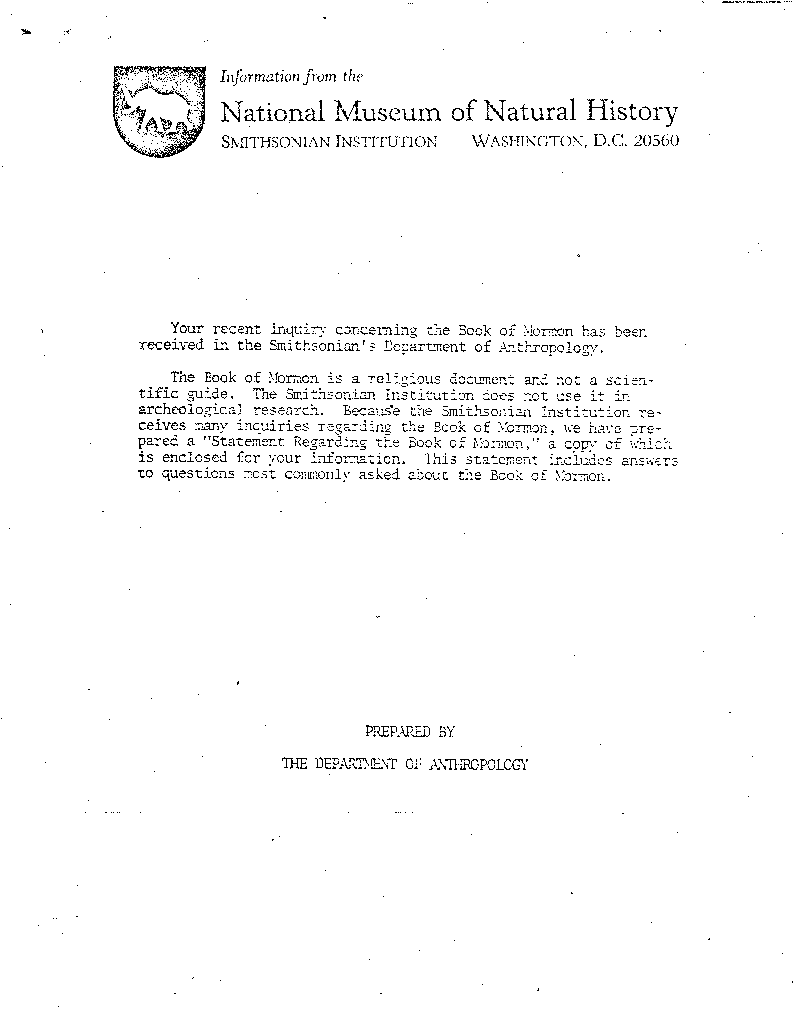 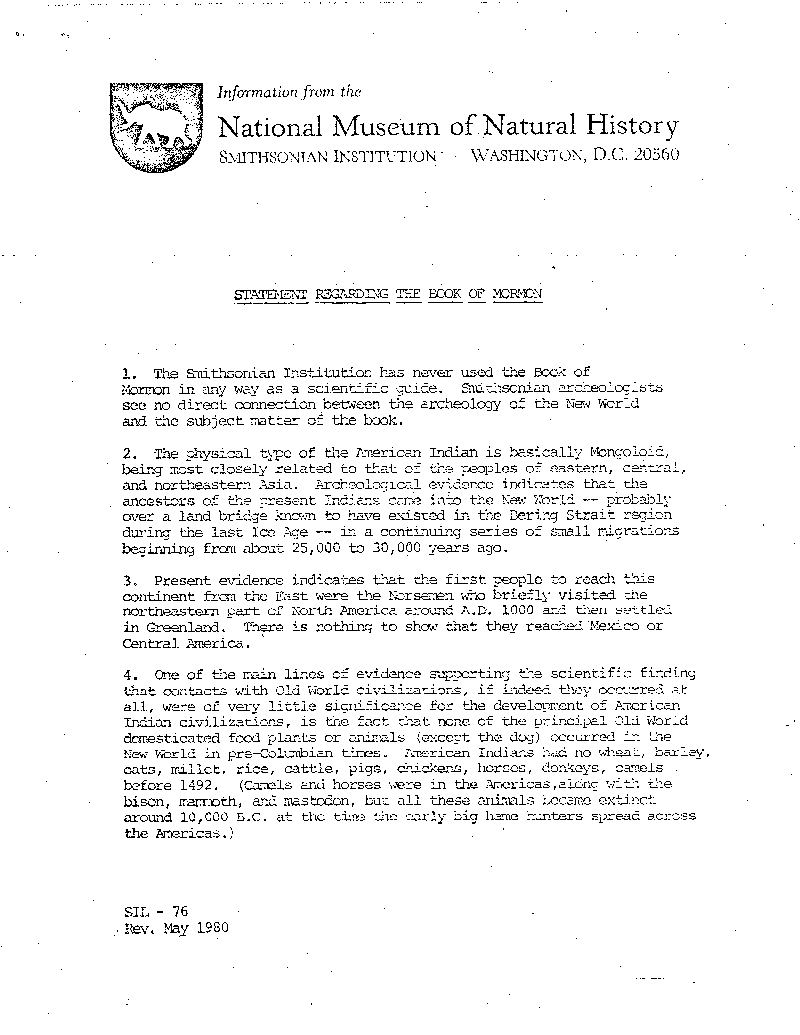 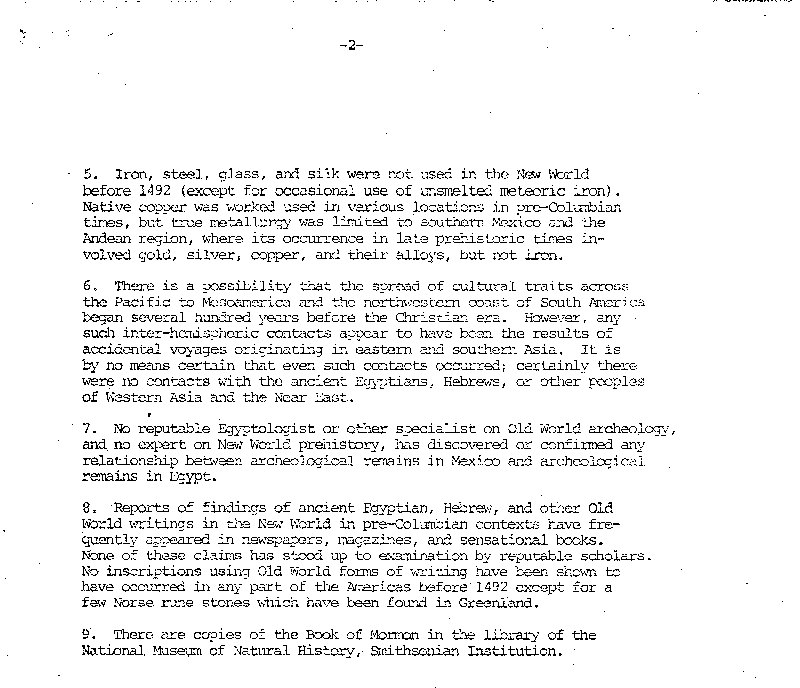 In a more readable format, here is what that letter says:

Statement Regarding the Book of Mormon

Need more? From the Book of Mormon, this is Alma 7:10. Alma is preaching to "the church" that is in Gideon (see Alma 6:8). The year is said to be 83 BCE and Alma is revealing where "Jesus" will be born.

"And behold, he shall be born of Mary, at Jerusalem which is the land of our forefathers, she being a virgin, a precious and chosen vessel, who shall be overshadowed and conceive by the power of the Holy Ghost, and bring forth a son, yea, even the Son of God."

We know without doubt that Yahowsha was born in Bethlehem of Yahud, not in Yarushalayim. Mormons will try to say that Alma was referring to the county or district of Jerusalem, but that dog won't hunt. There was no district or county of Jerusalem. Mormons will explain that Alma spoke of Jerusalem being "the land of our forefathers" and therefore was not referring to the city itself. That soiled garment won't wash either, because Yarushalayim is a city and not a land. So we are left with one of God's spokesmen preaching to a church before churches were even concocted by the false apostle Sha'ul, lying to their faces in the name of "God". And we are to accept that this is divinely inspired writ?

Song / Mizmor / Psalm 19:7
Yahowah's Towrah is complete and entirely perfect, returning and restoring the soul. Yahowah's testimony is trustworthy and reliable, making understanding and obtaining wisdom simple for the open-minded and receptive.

) Towrah (torah – teaching, guidance, direction, and instruction) is complete and entirely perfect (tamym – without defect, lacking nothing, correct, genuine, right, helpful, beneficial, and true), returning and restoring (suwb – transforming) the soul (nepesh – consciousness). Yahowah's testimony ('eduwth – restoring and eternal witness) is trustworthy and reliable ('aman – verifiable, confirming, supportive, and establishing), making understanding and obtaining wisdom (hakam – educating and enlightening oneself to the point of comprehension) simple for the open-minded and receptive (pethy – easy for those who are receptive).